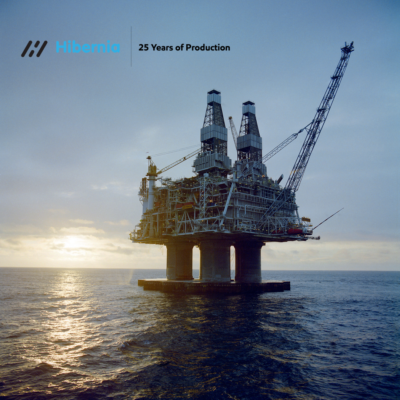 “The Hibernia Project came to life at a time when Newfoundland and Labrador was facing the economic and cultural challenges of the cod moratorium. Hibernia created thousands of jobs and new government revenue at a time when it was truly needed,” says Stephen Edwards, President of Hibernia Management and Development Company Ltd. “When Hibernia produced first oil in 1997, the slogan of the day was ‘people pioneering offshore excellence’. It is humbling and inspirational to recognize that those words, just like the platform itself, have stood the test of time.”

Today about 95% of those working on the Hibernia Project are Newfoundlanders and Labradorians. The skills, technical ingenuity and work ethic of the team has been the backbone of Hibernia’s successes for 25 years and will continue to be well into future. That future is exciting with the potential for Hibernia to continue production for another 20 years.

Hibernia was celebrated as a new dawn for the province’s economy in 1997 and has continually exceeded expectations over the past quarter century. Production was expected to last 18-20 years and produce 520 million barrels of oil. As of this month, Hibernia has produced 1.2 billion barrels of oil and Hibernia and Hibernia Southern Extension owners had paid almost $19 Billion under fiscal agreements to the provincial and federal governments since 1997. An estimated $1 Billion of that was in the first 9 months of 2022.

The Hibernia Management and Development Company Ltd. is marking the milestone with events for onshore and offshore teams, and was the focus of an approximately 600 person gala celebration hosted by Energy NL in St. John’s, NL last night. At the evening event, Hibernia was recognized as the launching pad for the province’s energy industry. The magnitude and continuous operations of Hibernia meant the foundational elements needed for additional exploration, drilling and expansion were in place, making the industry and province more appealing and feasible for further development and growth.

“For the Hibernia Management and Development Company Ltd., it is important for people to be at the center of celebrating this anniversary. 25 years is an incredible milestone and so many people have played a role in getting to today,” Edwards added. “The team at Hibernia has experienced support from communities, businesses, industries, and governments throughout the province. Each are part of Hibernia’s success and have created their own successes in conjunction with the project, snowballing the benefits and opportunities that started with Hibernia. We’re marking the occasion by acknowledging, thanking, and celebrating all those who have contributed.”

Hibernia’s legacy in Newfoundland and Labrador extends beyond the careers, business opportunities and government royalties. As part of project commitments and regulatory obligations associated with Newfoundland and Labrador benefits and the requirement to conduct R&D in the province, the Hibernia Project has been a pioneer in increasing resources, programs and access to STEM for the province’s youth. For example, millions of dollars have gone to Let’s Talk Science to bring engaging science-based programs to youth across Newfoundland and Labrador. It has also supported training, infrastructure, and scholarships at educational institutions, as well as various community groups and not-for-profits throughout the province.